How a Bus Tour Can Boost Presidential Campaign? 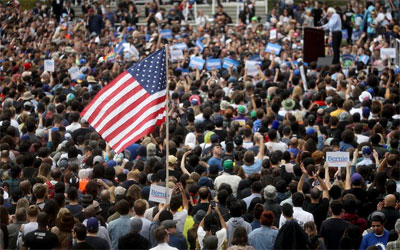 A bus tour is the most effective and transformative way to advance a political campaign. Over the years many successful presidents, governors, and senators successfully experimented with this unique campaign style. There are many advantages to a campaign on a bus wrapped with a striking and bold message. Especially this is true during a presidential campaign when so many candidates struggling to break through the crowded field. As the presidential election kicks off, many candidates are using this amazing campaign technique to reach out to rural and suburban voters. Vice President just announced his No Malarkey Bus Tours through Iowa to connect with voters.

Here are the main reasons a Bus tour is effective in political campaigns.

1. It Gives the Candidate Greatest Exposure

Many candidates, especially less known, struggle to get the attention of the public once they start their campaign. This can be a major obstacle and great disappointment for many candidates. A bus tour through the countryside can give a candidate the greatest exposure. Rather than traveling in a convoy of vehicles, a bus wrapped with the message of the candidate will be highly visible and can easily captivate the people.

2. Get Your Message Across

Is your candidate struggling to get your message across? Consider a bus wrapped with the precise message of the campaign. Any successful campaign will have a one-liner that can transform the thought process. The lines like, Make America Great Again, Change we can believe in were hugely popular.

When the candidate travels on a bus, you have the luxury of bringing a team of media personnel thus further expanding your news coverage. In today’s age of instant messaging and instant breaking news, the presence of the mainstream media will be of great value.

4. Bring The media with the tour

When the candidate travels on a bus, you have the luxury of bringing a team of media personnel thus further expanding your news coverage. In today’s age of instant messaging and instant breaking news, the presence of the mainstream media will be of great value.

5. Mobilize people around your message

A bus campaign is the greatest avenue to mobilize your base and galvanize the ground support.

6. The bus campaign is cost-effective

For those who are way behind is fundraising should consider a bus campaign since itis less expensive and cost-effective. Rather than spending thousands of dollars on media advertising, it is relatively cheaper and much more effective way of communication. For example, a 10-day bus tour can be done with us for less than $ 25k. This price includes the wrapping and creating the graphics.


Prompt Charters and Tours has been the leader in political campaigns in North America. We successfully managed many presidential, gubernatorial and presidential campaigns. If you are looking for an expert in bus tour campaigns, please call us at 877 277 6678 or email us sales@promptcharters.com